Posted on November 12, 2010 by InkQuillibrium

I started to draft this post last Sunday which was not a good day. 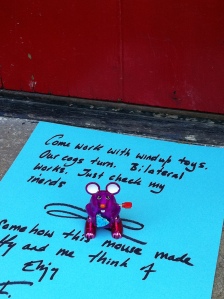 I finished it in the doctor’s waiting room, the second of the waiting rooms in which you wait in the US. This is something that Jerry Seinfeld comments upon. The sheer amount of waiting rooms and opportunities to wait that are offered by the US health system. First of all you wait in the communal waiting room. Then after some considerable time you are ushered by a typically-taciturn nurse, donning the latest colour in scrubs (currently lilac) into another waiting room where they measure your height to check that you have not grown since your last visit. Despite my mildly ironic comments, the nurses continue to take this occupation seriously. This time I had even more time to wait because when the doctor did appear, he then disappeared again and my lilac scrubbed attendant had to go and retrieve him. He then had the audacity to look mildly irritated that I was so busily engaged, tapping away on top of the consultation table.

12.56 on Sunday and I am having a Bloody Mary, all by myself. This is somewhat atypical but things are falling apart. Alexander is screaming his head off because his black and gold wings are, or are not, at the correct angle but it is near impossible to determine at what angle he wants them. I have reversed them, put them upside down, put them on his front and of course his back, but he remains inconsolable. Quite honestly a liquid lunch is preferable to having to sit down with my offspring. So all I can say is thank god little Ben in Eleanor’s class decided to have a shyness attack and I am no longer active in the carpool to this afternoon’s party at Little Stars Gymnastics.

So the wings have just hit the gravel outside the kitchen door and I hope to secrete them in the trash before he remembers them. Maybe time for a second Bloody Mary? On top of this, I have to admit that this blog is driving me nuts, or “into nuts” as Eleanor puts it. It is like a fourth child. There is always more to do and invariably you are probably doing it all wrong.  Plus I admit to a little hair of the dog.

It was Saturday evening and I had just finished reading a missive from an old friend in London. She related her encountered with my parents at a toddler birthday party, otherwise populated by single Hungarian mothers and affluent but morally suspect Italian City bankers. Apparently their advice for my life was generally that I should be drinking more wine. I was digesting this fact and wondering what to do about it when I heard a soft tap on the door.

An unwinged goddess stood there bearing a bottle of Spanish wine. I say ‘goddess’ not merely because she bore gifts of deliverance, but because I once found this same individual sitting cross legged in my basement clearly pronouncing the following words into her handset “55 billion just isn’t enough”.

Now if you are familiar with the typical American basement and most certainly our basement, the incongruity of this statement and the surroundings would be enough. As it happens the comment was set against the mayhem of Alexander’s first birthday. Rosalind had convinced me to invite her friends and they were rampaging through the house. The birthday boy was miserable and howled. A few residual parents clung to the far end of the sitting room hoping for sustenance. I was unable to placate all needs and all in all it was an unalleviated nightmare.

When the crashes from the basement reached such a volume that it became impossible to ignore them, I descended into the inferno to see our young guests hurling themselves off the bookshelves that line the walls. On the floor, amidst the chaos, sat this figure in clogs, a beautiful South American shawl draped about her person and a two year old boy curled up upon her knee. The memory will remain engraved in my mind forever.

A fragment of the health care reform bill was being brokered from my basement. I live vicariously on the very edge of Washington politics and this was thrilling.  Furthermore universal health care is something I just cannot imagine any non-barbarous society having an objection to.

On this I am clearly wrong. The day after last week’s elections my trusty shower radio crackled into action and informed me that California had voted against reducing carbon emissions and that Arizona had voted in favour of ignoring the shreds of health care reform that eventual reached them. The litany of extraordinary decisions tumbled from the radio.

Now if there is one thing that drives me into nuts about living in America, it is the fact that there can even be a debate about allowing everyone access to healthcare and I am fairly sunk amongst the pistachios when it come to those whose arguments to preserve foetal life seem to completely overlook what happens to the child that is born. I have thought of printing bumper stickers along the lines of:

Not Foetal? .. Fatally challenged!  Stay in the womb!  Hang on in there. Half the US is gunning for you, you’ve never had it so good!  Once you are out nobody cares, you’re a gonner, you’re on your own!   Being delivered into the US healthcare system is quite simply a “Foetal Mistake.”

I realize this might need to be more of a T-shirt and maybe two sided but perhaps if any of my readers show sufficient interest in the idea – see poll below -I could condense it a little.

Later that day I found myself in a lovely independent toy shop (not politically independent although they are almost certainly all tofu loving monkey huggers) playing with a colourful variety of wind up toys. I realized there is nothing more cheering than a wind up toy: crabs sidling along with a waving claw, red ladybugs (US English) /Ladybirds (UK English) with ambling black legs and antennae, and a particularly positive blue mouse with a hunk of purple cheese doing backward flips.  I left one on the doorstep of Ms 55 billion advocating a new career in clockwork toys where cogs turn and bilateral has to work or nothing moves forwards or flips or waves a claw.

I can imagine nothing more heartening.

1 Response to Clockwork toys to Congress