Posted on December 7, 2010 by InkQuillibrium 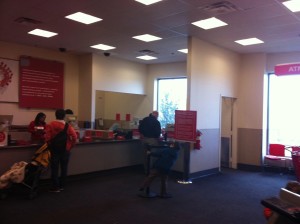 What happens when Capitalism comes full circle? As far as I can work out you end up in Rockville in an eerily Communist landscape.

Rockville, for the uninitiated, is a massive six lane highway, or it might even be eight but for reasons of self-preservation, my memory fails me. It features in an undercover conversation in the movie Syriana but apart from that and its six lane highway it is going nowhere.

It would be hard to give it a location. It is not a place. It sprawls along one of the key arteries out of DC, some 6 or 7 miles north of the border.  It is lined with strip malls which are no where near as interesting as they sound to the foreign ear. Tanning salons tumble alongside pawn shops touting engagement rings for those who are still experiencing the rosier side of life. Squished against them are discount mattress stores and discount almost anything. The sprawl is like a game of Tetris gone horribly wrong, a short circuit, an apocalyptic shambles generously framed by acres of parking lots.

Since I arrived I have variously called it Rotville, or Grotville but I have been gentler on it since an impressive Irish woman in her senior years reprimanded me. She had known Rockville as it once was; a small town with Victorian wooden homes and the site of poor Scott Fitz-Gerald’s remains. The churchyard in which he is buried now looks out onto this mess, just feet from the roaring traffic. I have long vowed go and break open a bottle of champagne upon his tomb although I would probably have to keep the bottle in a brown paper bag which would make the gesture rather less splendid.

It took me several years to understand that this was where stuff was bought and when I finally ventured north I was struck by how close it all seemed to a Communist urban landscape.  The buildings are purpose built and in the cheapest possible way with absolutely no interest in exciting pleasure, visual or otherwise. Cheap cubic structures whose only function is to provide shelter for the goods and transactions they house. The choice of products is limited and generally of bad quality. The formula is only palatable and therefore accepted because the items are cheap.

Strangely, despite the fact that I live in what is probably the most consumerist country in the world, my desire to consume had declined since I moved here. It is in not simply that it is hard to find something truly tempting but the process is so pleasure less. Even in the ostensibly ‘stylish malls’ one is oppressed by the cogs of the great retail machine. The conveyer belt no longer ends in the factory but only when the shopper hops off it at check out.

When I was down on the Mall at the Rally to Restore Reason, I saw a placard saying “Separation of Corporate and State”. Whilst obvious, it was my favourite in an edgy sort of way.  Along with healthcare reform, the other major thing that baffles me about the US is the voracious axe grinding against the power of government (which, as with most governments, seems fairly disorganized and at best a waste of money) versus a strange popular apathy when it comes to the much more sinister power of the corporations. There is the sense that because the corporations are crowned with the insignia of ‘free enterprise’ it must be okay. That it will all work out for the good in the end.

I was in Rockville for the purpose of acquiring a new reindeer for my golden pumpkin. This recycling business is actually getting less green and more costly by the minute. To minimize my global footprint I decided to also return some zebra print ballet shoes to Target that were so painful as to be unbearable. They were cheap at $9.99 and I had succumbed to the mantra of cheap although they were not what I was really looking for. My success in the yard décor department was not much greater. A vulgar reindeer looked down at me, its feet trussed with wire to cheap red shelves. Below it a very, very vulgar penguin looked up at me beadily from within its blue and green striped scarf. At home a quick Google reveals that the more delicate breed of reindeer has gone east and is materialising across the English countryside in an outbreak of House Bling.  With even our reindeer moving on, the outlook looks increasingly bleak for Rockville. 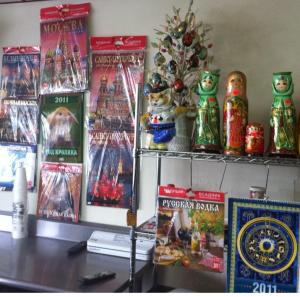 Fortunately, for the success of my trip, I was able to move on to the Eastern European shop named “European Delight”. The staff is very Eastern European having suffered under Communism and is not really delightful at all but they did give Alexander a chocolate Easter rabbit which, though un-seasonal, showed a degree of initiative and ambiguous charm. I bought some Russian salmon roe in a tin (the best is presented worst) and some smoked sea bass and turbot which are both delicious. Next door is an Iranian shop with unbearably delicious baklava, fresh pistachios, miniature tender eggplant and oranges piled high with their leaves.

The polar extremes of my Rockville experience remind me of the British artist Michael Landy who, when not shredding his entire life’s possessions in the window of a major department store, did beautifully detailed and vastly enlarged etchings of the weeds growing amongst the paving stones of London.

These little shops that sell the more delicate things in life and where errands can be enjoyed rather than traversed in remote control, are like weeds forcing their way through to the light in this terrible game of Tetras.

It is weird and somehow bitterly ironic that the edible delights and quixotic courtesy should be offered by shops born out of oppressed regimes.

Will they too come full circle and end up like much of the murk in Rockville selling Goldfish (a form of kid cracker – it comes: multigrain, coloured, low sodium and original) rather than smoked fish or will the existing murk do another half circle and in several decades be handing out un-seasonal bunnies to toddlers on a passing whim?

1 Response to What happens when Capitalism comes full circle?