Posted on September 13, 2013 by InkQuillibrium 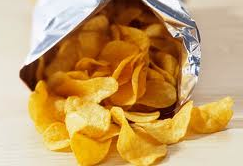 Snack is a Crinkly Wrapper

Play dates, we have all had them, like the flu.

The most memorable was when my six-year-old guest boldly cocked her head on one side and asked me for $20 to play nicely. At the other end of the scale I have had the blond curled Amazon who made a several hour game of hunting down any resident stink bug and evicting it. But somewhere in between these two extremes there lies the lingering, directionless play date, which is by far the worst. The bored child who does not know what to do whilst your own child is absorbed in hanging from the top of a bookcase – lost in cosmic thought.

Invariably the bored child sidles up interrupting a perfectly good session of aimless Internet browsing – one cannot focus on anything constructive with a play date in progress –  and announces that it is ‘hungry’.

It is too bored to even sound hungry. The remains of snack lie fresh on the table but that is not what it is after. The word ‘Snack’ holds the possible promise of a crinkly wrapper. “What sort of hostess are you?” the steadfast eyes enquire. ‘Is she a crinkly snack mom who cannot differentiate a piece of fruit from a  gummy bear or is she a nutritional psychopath with a tired banana?”

Time to rise up from the swivel chair, repositioning my visitor’s steadfast eyes upon my navel, and announce ‘nutritional psychopath’.

Food, or rather snacks have become the sad alleviator of boredom and the directionless moment. As a Legal Alien, I blame the Cheerio for starting all this. The Cheerio has since attempted to assuage its guilt by passing the baton to the Goldfish cracker which comes in a mesmerizing array of varieties that bear minimal differences to each other, bar the rainbow ones which look every bit like cat biscuits.

To make matters worse someone invented the snack cup and added the time-strapped adult. Active child, snack cup, gold fish = 20 minutes of sedation.  The snack cup – which turned out to be a novelty when I pulled it out in London several years ago – allows your child to painstakingly extract one small snack molecule at a time providing prolonged brainless distraction.

Snack has come to be used as a means of controlling and subduing one’s child. When it comes to groups of children, snack is used more liberally as crowd control. After a soccer game children are corralled with the lure of snack regardless of the fact that it is actually time to go off and have lunch. There appears to be a lurking fear that without these well-timed mouthfuls, the lurking Caliban in our children will be released.

The problem is that continual snack as appeasement and sedation is actually backfiring. You find yourself confronted with Caliban at dinner and he is wielding utensils. Not surprisingly he is not hungry and not interested in trying anything new because he is not bloody ravenous. Ravenous is how I like them. Ravenous eats asparagus and second helpings of pasta.

Socially it is a pain but health-wise not eating at the long-respected meal times is unhealthy and a cause of eating disorders, child hood obesity and dysfunctional family relationships.

The evil influence of snacks on our children and the social beings we are raising has been my bugbear for some time. And so it was with some thrill, that I read an article in The Wall Street Journal reviewing a book by Pamela Druckerman about how the French make better parents. Whether this is true or not (apparently there was a violent reader backlash) the rule of allowing only one snack mid-afternoon, “le gouter”, makes total sense even for younger children. Remove the endless snacks and you might find that your child becomes a companionable dining presence with an enquiring mind and palate. Furthermore they are likely to grow up with a measured appetite, good biorhythms and not conditioned to graze from the cupboards during moments of boredom.

Putting health aside, incapacitated on stretcher somewhere, and allowing etiquette to slip effortlessly under the table – might the preponderance of snacks have wider consequences for our social development?

According to The Wall Street Journal article, we are failing to educate our children in the simple act of learning how to wait. Whilst sounding like my grandfather and probably his grandfather, doesn’t a little Spartan resilience build character and doesn’t boredom spark the kind of ingenuity that the quick sedative shot of a snack will not? Is extracurricular eating beginning to shape not only our bodies but the way we live and who we are?

According to a report by the United States Department of Agriculture, Americans spend 78 minutes per day engaged in secondary eating or drinking – which is more time than they spend eating actual meals.

Michael Pollen, author of a series of books on how modern society and food intersect, recently published Cooked. The book advocates a return to the communal, home-cooked meal, which he argues, has exercised a civilising force on us for thousands of years – or two million to be precise.

Pollen embraces the theory of the Harvard primatologist, Richard Wrangham, that the first civilising meal took place about this time, when our ancestors first gathered around a fire to experiment with some rudimentary BBQ. Not only did our brains surge in size, which he attributes to cooked food providing more nutrition for far less effort, but we learned to exercise self-restraint and not steal each other’s bones. “Around that fire,” Wrangham writes, “we became tamer.”

With the demise of cooking, Pollen sees “not just the meal but also the occasion: the practice of eating together at an appointed time and place” as established by our hairy ancestors, as at risk in the developed world. Having civilised ourselves, we are now turning back the clock with what must be inevitable consequences for the health of the family nucleus and the wider fabric of society. Pollen paints a vivid impression of the impact of the first ‘civilising meal’: “This was something new under the sun, for the forager of raw food would have likely fed himself on the go and alone, like all other animals. (Or, come to think of it, like the industrial eaters we’ve more recently become, grazing at gas stations and eating by ourselves whenever and wherever.)”

So what is to happen to a society that is rapidly returning to the state of industrial forager, first and foremost? As roots and berries have been replaced by crinkly wrappers we will not want for calories, quite the contrary. But are we developing a generation accustomed to instant sensory gratification with no self-restraint? The Atlantic Monthly already cautioned us on the maturing generation of ‘teacup’ kids who require encouragement on a constant drip. Is snack just another emotional crutch?

In fact hasn’t the time come to set an example and unplug ourselves from our 32oz lattes and mochaccinos? Isn’t the sight of mature adults endlessly hooked up and sucking on straws getting a bit suspect – one heaving human matrix nursing at the Starbucks’ mammary gland? Isn’t this dependency making us not just physically –  but also emotionally flabby?

Will we be found watching, mochaccino in hand, as the Tiger Mothers’ cubs leap forward, claws bared and make mincemeat of the Goldfish munchers. Will the humble Cheerio eventually be brought to task for having spelled the demise of the American empire?  For an empire to crumble beneath its snack would be a miserable end indeed.

The very origin of snacking is bad. Look back to what is probably the most infamous snacking moment of all time – Adam and the apple. Had he been able to hang in there,  (through the cool of the day)  ‘til dinnertime, he would have saved an awful lot of people an awful lot of trouble.

THIS BLOG NEEDS YOU:  If you enjoyed this fragment of life,  take a moment to post your comments or share.  YOUR WORDS ARE GREATLY APPRECIATED.